With just a week to the Gala the singers are gathering - KATE ALLEN has just arrived from San Francisco to sing in Ireland for the first time since she left to continue her studies in sunny California in 2009. She's been mentored by none other than Marilyn Horne and has just had a huge success as Lucretia in Benjamin Britten's "The Rape of Lucretia" with the San Francisco Opera's Merola Programme.

BRENDAN COLLINS has returned from making his debut in a solo role both at the world-famous
Glyndebourne Festival in East Sussex and the BBC Proms in London's Royal Festival Hall. Brendan is a big favourite with Glasthule audiences who have enjoyed his portrayals here of the major baritone roles  -  Mozart's Figaro, Toreador (Carmen) Pere Germont (La Traviata) and Marcello (La Boheme)

Terrific rehearsal with the orchestra yesterday - EOIN HYNES  singing of "Il mio Tesoro"is just beautiful and as for "You are my Heart's Delight"...........there won't be a dry eye in the house!!
And I can just imagine the audience joining in with SARAH POWER ( on a flying visit from her rehearsals with Scottish Opera in  Glasgow ) and BRENDAN as they pour out the nostalgia with the "Merry Widow Waltz".

The lucky people with tickets are in for a real operatic treat. The Gala is sold out and the Pavilion has a waiting list for returns!!!
Posted by Glasthule Opera at 07:56 0 comments 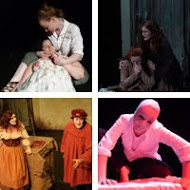